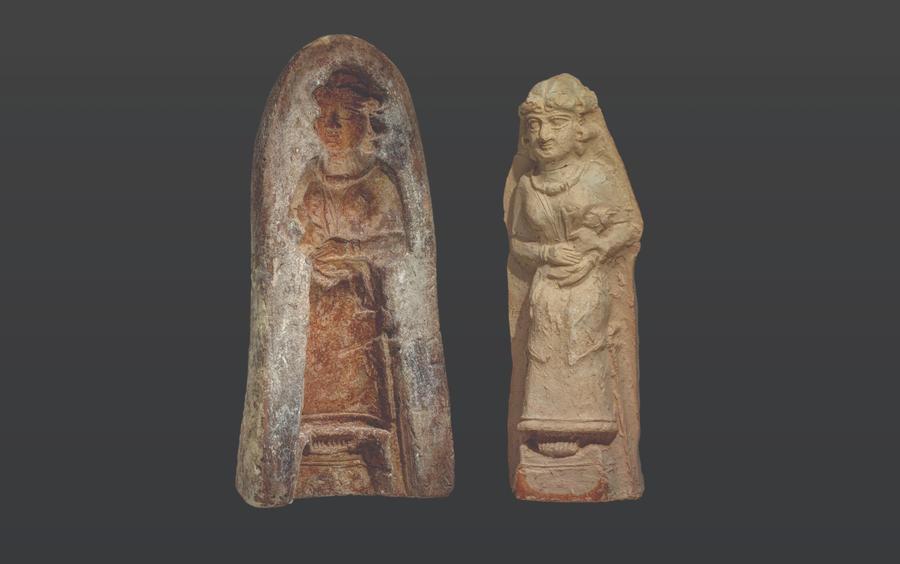 This week, the Yale Babylonian Collection opened a new exhibit, “Women at the Dawn of History,” at the Collection’s home on the third floor of Sterling Memorial Library. The exhibit gives voice to women who lived in Mesopotamia during the fourth through first millennia BCE. Mesopotamian society during these periods was fairly patriarchal, and the surviving depictions of women in art and literature mostly present them relative to men: mothers, wives, daughters. Curator Agnete Lassen and postdoctoral researcher Klaus Wagensonner, who put the exhibit together, say they initially expected to have a lot of trouble finding women’s voices in the historical record. In fact, once Lassen and Wagensonner started looking at Yale’s collection, they found traces of women with agency – authors, scholars, ritual practitioners, business owners, and elite women – in every medium.

The best-known of these women is Enheduana, a priestess of the moon god Nanna and a prolific poet. Like Hesiod and Sappho, Enheduana identifies herself by name in several of her poems, and she’s thus the first poet anywhere in the world whose name we know (she lived in the early twenty-third century BCE). Our earliest copies of her work come from several centuries after her death, which means she must have been well-known and well-read for some time after her death; her works were studied in schools. But these poems are of particular interest to Lassen and Wagensonner for a different reason. We have very few documents in which women address other women; Enheduana’s poetry is addressed to the goddess Inanna (and sometimes to the goddess’s temples, personified as women with wombs). A tablet of these poems is featured in the exhibit.

Enheduana is something of an extraordinary case. Lassen and Wagensonner had to look a little harder for the voices of ordinary women. But they’re there. One tablet, for instance, preserves a dialogue between two women, who begin to argue and eventually take their quarrel before a judge. The dialogue probably doesn’t preserve the speech of real women – it’s likely fictional, written by a male author for use as a legal or grammatical textbook. Nevertheless, it offers us some insight into the legal agency of women, and into the male perception of female speech.

A highlight of the exhibit is a display devoted to women’s seals. Mesopotamians used these seals – small, carved cylinders of semi-precious stone – to authenticate documents. The seals were rolled along the margins of a clay tablet – “rather like modern signatures,” Lassen says. Like signatures, these seals weren’t used on every document – they tend to show up on official records and financial receipts, and such documents often have a blank left margin set aside specifically for seal impressions Unlike signatures, though, the seals often featured pictures as well as text, and women’s seals in particular tend to portray scenes of collective female labor, like temple worship. The existence of these seals – and of tablets bearing their impression – provide further evidence for the financial and legal agency of women; they show us women undertaking business transactions and lawsuits in their own names.

The Yale Babylonian Collection also publishes an extended catalogue for the exhibit, featuring essays by Lassen, Wagensonner, and Professor Eckart Frahm (NELC), as well as Amy Rebecca Gansell (St. John’s University). The Collection has also partnered with Archaia, the Department of Near Eastern Languages and Civilizations, and the 50/150 Anniversary of Women at Yale celebration to present a symposium, also titled “Women at the Dawn of History,” on Saturday, February 29. Professor Zainab Bahrani (Columbia University) will deliver the keynote address, and the symposium will conclude with a guided tour of the exhibit.