This interdisciplinary workshop serves as a meeting ground for those who work on the ancient world at Yale, and is an important forum that allows sustained conversation about a common theme. The workshop meets once a month during the academic year, and is supplemented by the core graduate seminar in the Archaia program. Presenters include Yale faculty and graduate students, as well as occasional visiting professors. The chronological scope of the seminar extends over the first millennium BCE and up through the premodern period; issues of reception are also considered. 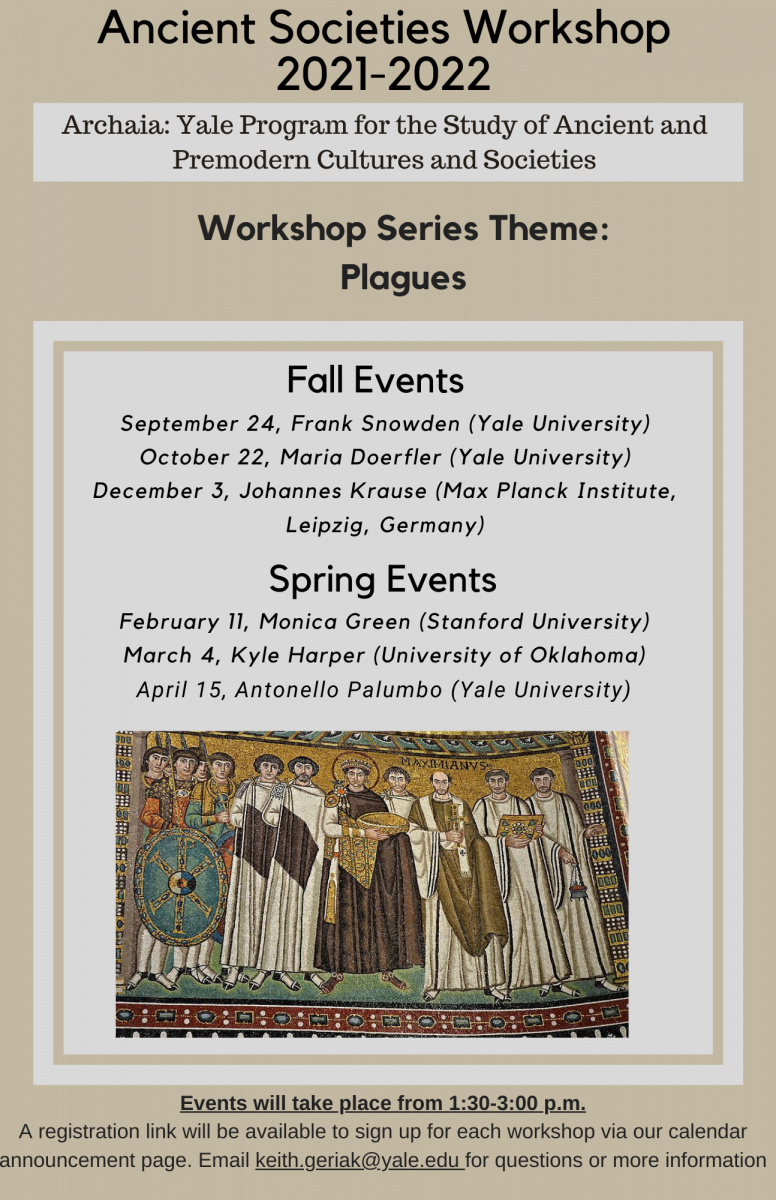 Sponsored by the MacMillan Center. 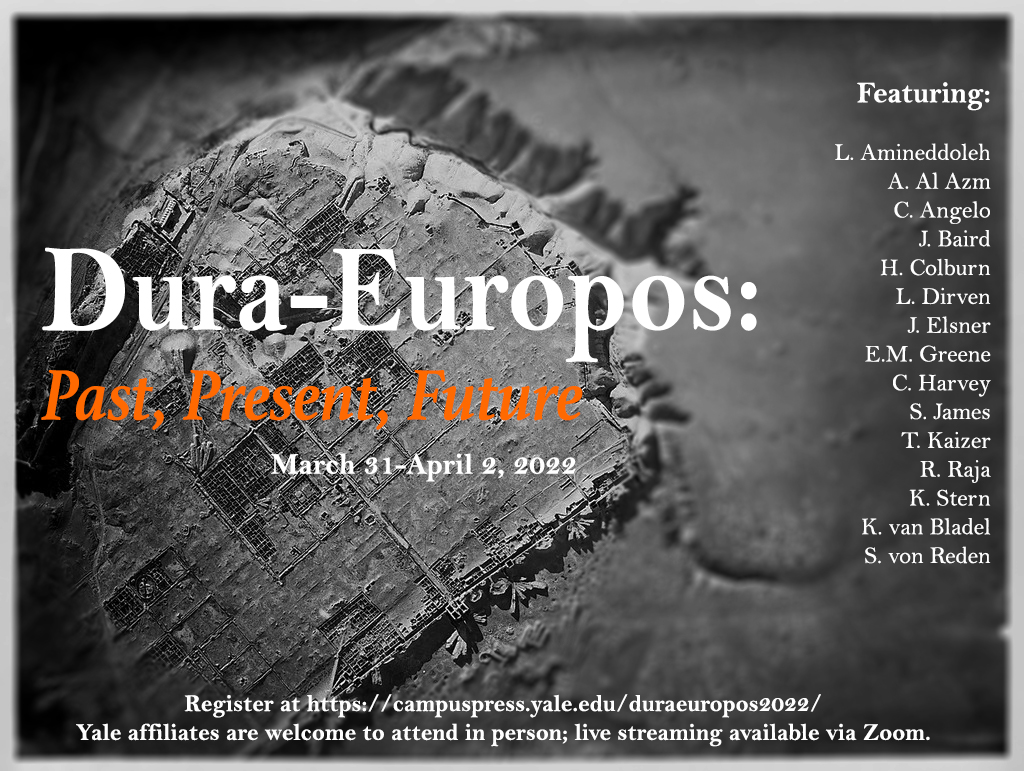 “In the crucible of Empire: resistance, revolts and revolutions in the Greco-Roman world”, October 30–31, 2014.

Please visit this page for the conference proceedings

The Archaia Forum is an interdisciplinary working group for graduate students who take the distant past as their object of study. During the Fall term, we will meet five times in Phelps 401 in order to discuss key themes and current trends in interdisciplinary study of the premodern world in a workshop format. Each week will cover one theory or trend that multiple disciplines share in their study of individual regions and time periods. Past years’ themes have included the integration of history and the hard sciences, defining the “premodern”, and cross-disciplinary approaches to genre. During the Spring term, over the course of another five meetings, we will focus on the sharing of original research by participants, with priority given to work-in-progress presentations by graduate students completing capstone projects for the Archaia Qualification. Our scope for the term “premodern” is broad: we welcome students of cultures across the globe and periods across the ages to share their approaches to the past.

Women in Ancient Studies Forum (WASF)  Women in Ancient Studies Forum at Yale University is a forum for scholars in ancient and premodern studies that builds an academic community across disciplinary boundaries. No matter which region or premodern period you study, which department you are affiliated with, or which methodologies you use, we hope you will check out some of our events. Our monthly meetings range from panel discussions and receptions to smaller lunches with faculty members. The one common theme is bringing people from different disciplines and career stages together and discussing questions pertaining to women, academia, and professional development. We’re interested in identifying and naming systemic problems, but also in creating spaces to address these problems. Several of our events are also designed especially for women in ancient and premodern studies to build professional relationships at every stage of their careers.

Cultures of the Classical ‘Cultures of the Classical’ was a network running from 2011-2017 that drew together scholars at Yale who work on receptions of Greco–Roman Classical Antiquity, and the Classical Tradition (including comparative Classical Traditions and rival antiquities). We are particularly interested in complex plays with the past in which texts and works of art, and indeed whole cultural movements, have appropriated aspects of Classical Antiquity while simultaneously asserting their distance from ancient Greece and Rome.  The scholars involve remain at the cutting edge of this kind of research.

Greco-Roman Lunch is sponsored by the Classics Department and is held bi-weekly, on the first and third (and sometimes fifth) Mondays of the month in the Fellows’ Room at Saybrook College. The invitation list consists of faculty and graduate students from the Departments of Classics, History, Art History, EALL, Judaic Studies, Religious Studies, and others, and they convene at 12:00 for lunch followed by a presentation by one of their number at 12:30. A presentation of up to 30 minutes is followed by questions. The focus of papers ranges freely from literary to archaeological to cultural. Lunch is provided free to those who are not on a meal plan. For more information please contact the organizers: Sylva Kroeber and Emily Helm (Classics).

Medieval Lunch Colloquium The weekly Medieval Lunch Colloquium brings together medievalists from a variety of departments in the University for informal presentations and discussion. At each meeting, a speaker presents work-in-progress to an interdisciplinary audience of graduate students, faculty and staff working in medieval studies. Speakers include both Yale faculty and graduate students, with occasional out-of-town guests.

The Hebrew Bible Lecture Series is co-sponsored by the Yale Divinity School and the Program in Judaic Studies. Every year it brings to campus some of the most significant scholars in the field of Hebrew Bible and Second Temple Judaism, both junior and senior, to share their recent research. These lectures make available to the Yale community the breadth of scholarship currently being produced on ancient Israelite and Jewish history, literature, beliefs, and practices.

Yale Lectures in Medieval Studies The Medieval Studies Program organizes Yale Lectures in Medieval Studies, an interdisciplinary lecture series which brings to Yale America’s most creative scholars of the Middle Ages, presenting innovative and exciting work in fields such as paleography, codicology, liturgical studies, music, history of art, archaeology, history, literature, and philosophy. The series, which is run by students in medieval disciplines, emphasizes intellectual diversity and rigorous scholarship and is a vital part of Yale’s interdisciplinary approach to the medieval period.

The Annual Rostovtzeff Lecture and Colloquium

The lecture honors the legacy of Michael I. Rostovtzeff, a titan of Ancient History and one of the greats of twentieth-century historical scholarship. Rostovtzeff taught at Yale from 1925 until his retirement in 1944. He was a world authority on Hellenistic and Roman history and wrote widely on ancient history, particularly in the field of economic history. The annual lecture brings scholars to Yale who work in areas pioneered by Rostovtzeff, but whose field-changing research takes Ancient History in new directions.
Visit Rostovzeff page at the Yale Classics website

The 2020 study tour Multiculturalism and Religious Practices in Ancient and Premodern Sicily, is being led by Carolyn Laferrière (carolyn.laferriere@yale.edu) and will take place May 29- June 9, 2020 . If you are interested in participating please submit you application here.

Please email us your suggestions or let us know what we have missed.